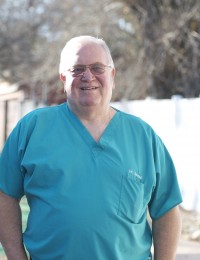 He was born and raised in northern Arizona.  They had a family business that included alfalfa farming and cattle production.

He developed a deep appreciation for agriculture and animals.  As a youngster he grew up wanting to go into human medicince.  As he was going to college a the University of Arizona after his high school graduation.  He earned his BS in Agriculture and decided that his love of medicine and his animal background would be a good fit for veterinary medicine.  He attended Colorado State University and graduated with is DVM degree in 1977.

He practiced for 3 1/2 years in Arizona following graduation.  He practiced in California for 3 years and then moved his family to Utah in 1983.